Having visitors is always a good prod to get out and about in your home town and so, when Nanny CBRbound came to visit from England recently, we did a grand tour of all the things Canberra has to offer.

High on our list of ‘must visits’ were the two parliament buildings – I’d been to Old Parliament House once before, briefly, when they held their grand Easter egg hunt for kids, but the place was packed out and I wanted to return on a quiet day to more fully take things in. And despite driving past ‘New’ Parliament House dozens of times, and even running past it during the Canberra 5km, I’d never ventured inside.

A visit to Parliament House has been on my wish list ever since we arrived in Canberra.

As someone with a fascination for walking in the footsteps of history – I have a long held ambition to one day rent the cottage where George Orwell wrote ‘1984’, just to sit in the great man’s place and look out upon the same things that would have inspired him, as he tapped out his manuscript, racing against the tuberculosis that riddled his lungs – gaining unfettered access to Australia’s corridors of power would easily make my list of brilliant ways to spend a day in Canberra.

Considering how many new buildings are misjudged by architects, Parliament House is actually a master stroke of design.

We went to ‘New’ Parliament House first. In these days of heightened security, I wasn’t sure how this would work – the building is, after all, a fully functioning seat of government. The Parliament House website is pretty vague, simply stating that you should contact Visitor Services for information. But a quick phone call revealed that, yes, you can just turn up; yes, there is parking for visitors (free for the first two hours); and no, you don’t have to pre-book, show identification or even be Australian.

“Oh,” added the person on the other end of the line, “and there are free guided tours throughout the day, but try to arrive 15 minutes before the start as they are limited to 40 people and once they are full, we turn people away.”

The House of Representatives at Parliament House.

The tour allows you to go behind the scenes into rooms not open to individual visitors, but more than that, thanks to the knowledge of the guide, it gives you an insight into the evolution of Australian democracy and how it has grown from British roots to embrace many aspects of the US system.

The upper house is The Senate, more akin to the US upper house than the UK House of Lords.

And then there are the snippets of “I never knew that” information. For example, ‘New’ Parliament House can’t be ‘New’ because it’s the only permanent Parliament Australia has ever had – Old Parliament House, even when it was in use, was only ever designated as ‘Provisional’ Parliament House as it was always intended to be replaced by something more permanent. Thus it was conceived with a relatively short lifespan, whereas the new building is designed to last 200 years, apparently.

Old Parliament House is a short walk from its replacement.

One thing to say about the tour is that, if you are going to tour both buildings back to back, as we did, then the guided tours do cover much of the same information – sure there’s more history at Old Parliament House, but the functions of the rooms, the way the voting system works and the explanations of the democratic process are clearly much the same.

For me, the highlight of the new building was when the tour finished and we were allowed to take the elevator to the grassed-over roof. The architectural conceit that the nation’s politicians should not look down upon the Australian people but should be accommodated within the land they serve is a brilliant one, and one can’t help but marvel at the vast Australian flag, fluttering against a flawless sky with endless land in every direction.

Even as a Brit, it’s impossible not to feel a sense of pride when standing on the roof of Parliament House.

The advantage Old Parliament House has over its younger sibling is that access to the building is full and complete. There are no ‘off limits’ areas made necessary by the building’s primary function and you can pretty much go anywhere. Which got me wondering, are there any other decommissioned parliaments in the world where you can do anything similar – actually enter the Prime Minister’s office, sit on the benches of the debating chambers, or sit at the cabinet’s conference table, where so many momentous decisions have been taken?

Should we enter The Great War? How should we respond to Japanese imperialism? What should we do about the refugee boats from Vietnam? And so on, Australia will have debated and decided all of these things within these rooms.

The Prime Minister’s office — just imagine the decisions that were taken here.

Also of interest is the architectural archaeology of the place – early photos reveal how, until the 1920s or 30s, the Union Flag was often given equal place alongside Australia’s flag during state occasions. The British royal coat of arms, featuring the lion and unicorn, is prominent at Old Parliament House, but is replaced by the Aussie version, depicting a kangaroo and emu, in the newer building. 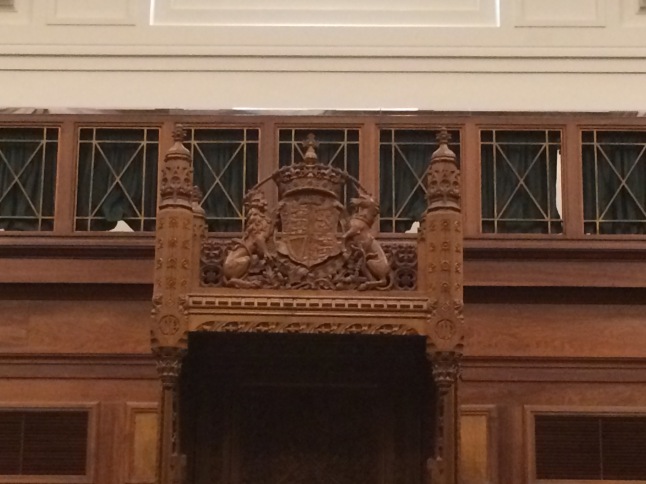 Australia’s roots as a British colony are clear to see in Old Parliament House.

Strata upon strata of layered history, in the walls, in the air, in the furniture, and you can feel yourself touching the fabric of every momentous event as you enter each room. 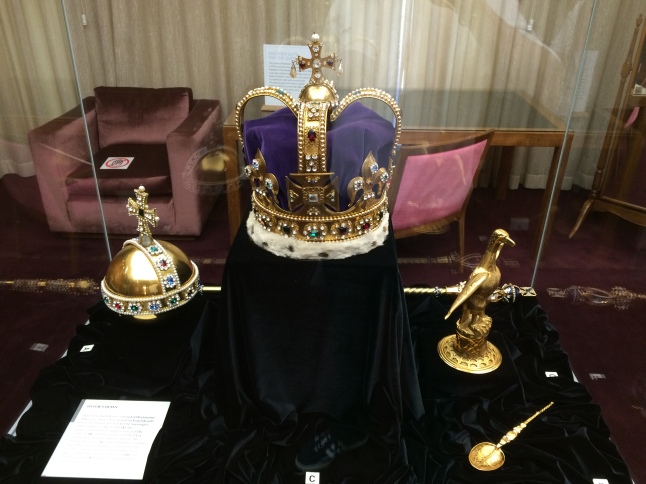 A replica set of the British Crown Jewels.

The net effect is to leave you appreciating this nation’s roots and struggles much more, as well as offering a fast history lesson in Australian history to any visitor or new migrant. I’ll return to both buildings, probably with the kids next time, and we may even see if we can get in to Prime Minister’s question time. I think that would crown things perfectly, as long as they behave themselves. The politicians, I mean. Not the kids.

2 thoughts on “The meeting places: Old and ‘new’ Parliament House”